Evan Van Gilson as a young boy has always been fascinated by fast and loud vehicles.  His first experience with helicopters was around the age of six 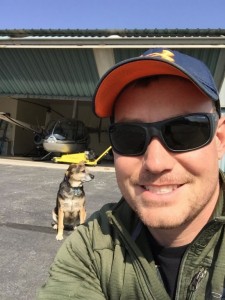 years old when the New Jersey State Police landed in the parking lot of his mothers work for a community event.  He remembers saying “This thing is awesome!”  In high school he began searching eBay for experimental helicopters joking about how one day he was going to buy one, with the money he didn’t have, and learn how to fly it.  As many young adults, when Evan graduated High School he went straight into the work force which instead of flying, he went into the law enforcement industry.  About 6 years later, Evan got his second experience with the N.J. State Police helicopter, but this time he actually got to fly in it.  Evan stared out of the window and pointed out all of the areas he recognized!  He felt like he was in a different world and he LOVED IT!  Evan told everyone about it and finally started taking lessons in helicopters.  It was a tough career move to make, but in his mind he kept saying “It’s now or never.”  He decided to follow his dream and fulfill his love for flying which has since lead Evan to great places, people and experiences.  And now it has lead Evan to you, the person reading this!  Evan has worked for 8 different helicopter companies in which 3 he is still working for.  Evan currently flies aircrafts that have just 2 seats to some that seat 10 in both Helicopters and Airplanes.  Evan has held positions for 135 Charter Captain and Company Check Airman, as well as Captain Positions for Privately owned aircrafts that he is part of managing. 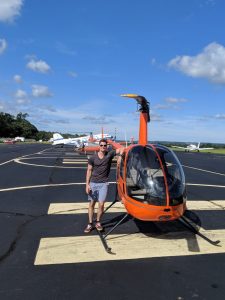 Brian Edwards doesn’t remember when his fascination with flight began, but he was making
airplane and helicopter sounds before he could talk.  While most elementary school kids brought
Magic Treehouse books to read in class, Brian would lug around a massive encyclopedia of
aircrafts.  Going to the Willow Grove airshow as a kid and watching fighter jets rip past made
Brian realized his dream of becoming a pilot.  Fast forward 15 years and as a mud covered
Sergeant Edwards watches Apache’s swoop and dive over a training area he thinks to himself “I should do that!”   He soon dropped a Warrant Officer packet and headed to Army flight school in Fort Rucker Alabama.  Army flight school was not easy, but he powered through, receiving a commercial helicopter and instrument rating.  After flight school he knew that just flying medevac Blackhawks part time in the National Guard wasn’t enough, so he came to Platinum Helicopters to master the Robinson helicopter and become a CFI. “The freedom of flying a
helicopter is unlike anything else; once you experience it, you’ll never want to be tethered to the
earth.” 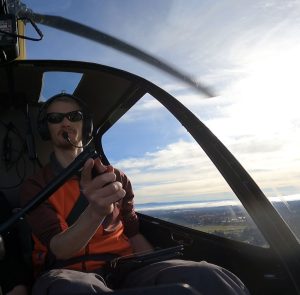 Pascal Werlen grew up in the mountains of Switzerland where almost all of the rescue operations took place by helicopters. When he was just a little boy, he was fascinated by the helicopters that flew into his valley to provide these medical services.  A couple of years later after he finished his apprenticeship, Pascal got his first job in the helicopter industry as a loadmaster.  This position allowed him to see how different operations can be with helicopters.  During that time his will to become a helicopter pilot became even stronger!  The work on the ground and as a crewmember was very interesting and he liked it a lot, but his dream job was always to be a pilot.  Pascal finally made the decision to leave his Country and flew to the United States of America to start his career as a Helicopter pilot.  In Portland, Oregon Pascal trained in all different weather conditions and finished his training in the Spring of 2022.  Pascal was interested in seeing a different part of the United States, so he found his way to Platinum Helicopters here in Princeton, New Jersey. 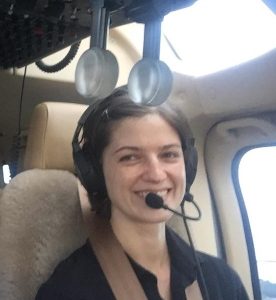 Alison Fleck started flying in 2011 after a neighbor suggested she pursue aviation as a hobby. He referred me to a fixed wing school at Sky Manor Airport, and while the Cessna experience was fun, it made Alison wonder about the helicopter school she had passed on the way in.  A week later Alison booked a demo flight in a R22 helicopter and was hooked!   Over the next few years with Sky River and then Platinum Helicopters, she earned her ratings and began instructing in Princeton.  In 2018 Alison started flying turbines, first in New York City for tours and charters and then out in Las Vegas for Grand Canyon helicopter rides.  When COVID-19 hit, Alison switched to medevac and spent some time with Air Methods in the mountains of upstate New York.  The work was intense and far from home, so she decided to take a break and come back to New Jersey.  It only took a few months for her to miss flying way too much!  Luckily there was an opportunity to fly again with Platinum Helicopters and Alison is very happy to be back in Princeton and back in the air!