We would like to Welcome Dalton to the team!

Platinum Helicopters LLC would like to welcome a new Flight Instructor and Helicopter Tour Pilot to the team, Dalton O’Rourke!  Dalton completed some of his helicopter flight training with us and we are happy to now have him on board as a Platinum Helicopters Pilot.  Below please read a little bit about Dalton:

The first time the thought of flight came into Dalton’s mind was at the age of seven. While fishing with his Dad at Island Beach State Park, Dalton heard a small buzzing sound in the distance. He turned around to see a Robinson R-22 flying just feet off the ground.  The pilot waved and smiled. Ever since that day, he knew what he wanted to pursue as a career.  After years of watching videos and looking up photos of helicopters, his parents surprised him with an introductory helicopter lesson.  He was hooked!  Fast forward to senior year of high school, sitting in his guidance counselors office, she asked what his plans were for after High School.  Of course, the answer was, “I’m going to be a helicopter pilot”.  The guidance counselor laughed and said he would never be able to do that, and should begin looking into the trade industry.  With his dreams crushed, he took the advice and began researching the trade industry.  While researching, an advertisement came up for Embry-Riddle Aeronautical University and their helicopter program, he decided to give it a shot and apply.  Next thing Dalton knew, he was starting his flight training in the R-22, in the mountains of Prescott, Arizona.  While finishing his degree in Aeronautical Science, and gaining his Privates and Instrument Rating, Dalton decided NYC was the place he wanted to fly.  After trying multiple flight schools, Platinum Helicopters became his home, where he completed his Commercial, CFI, CFI-I.  Eager to work, he began flying NYC tours and photo flights in and around NYC.  It’s never work if you love what you’re doing! 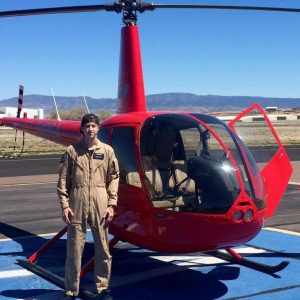